The next part of Joseph’s story can be found in Genesis 41-46. For last year’s lesson see HERE.

Recap: Joseph had been sold by his brothers (because they were jealous of him, not because he had been bad) and he was living far away in a place called Egypt. He worked for the king’s helper but got thrown in jail (again…he hadn’t done anything wrong). But he was eventually released from jail. He was now in charge of  Egypt… only the king was higher up than he was.

His job now was to collect food. They were going to have 7 years of lots of rain and good food and then 7 years of not much rain and no food (called a famine.) Joseph was very organized and he did a really good job collecting and saving up the food.

Sure enough, the rain stopped and the famine came. And the people were HUUUUNNNGRRRYYY! But the people in Egypt had enough food because of Joseph’s hard work.

All the other countries did not have much food and people came from very far away to buy some of the food Joseph had. Do you know some of the people who came? Some of Joseph’s brothers!

When the brothers met with Joseph, they didn’t even recognize him!

He pretended not to know them either. He tested them to see if their hearts were still yucky. He tried to trick them and said he would keep the youngest, Benjamin for a servant. But the brothers said, “Oh please no! Our father has already lost one son…he can’t lose another one! We are so sad about our brother who is gone and our father Jacob is so sad. Please please don’t let us lose another brother!”

Then Joseph knew they were sorry and that their hearts were no longer so yucky. He told them who he really was and they all stood…mouths wide open….and said, “HUBBA WHAAAAAAAAT?” (not really…but they WERE VERY surprised!)

He told them everything that had happened…and he told them he forgave them. He was not going to stay mad…he was going to love them and asked them to go get Jacob, the daddy. They all hugged and cried happy tears and then the brothers, their families and Jacob all moved to Egypt. Joseph was in charge of them now, just like his dream had showed. And even though his brothers had meant to do bad things to him, God had used it for good!

God had good plans for Joseph all along. It didn’t always seem like it…but even in the sad and hard things, God was putting Joseph just where He wanted him.

For our craft today we made paper dolls. We started by cutting out a man shape. Then we traced him on three smaller pieces of paper. From that, we cut out a coat (with some tabs on top and on the sides), a jumpsuit shape (with tabs) and a skirt and necklace (with tabs). You could edit these to look anyway you want..but below are the shapes we cut out.

We drew a face on Joseph,  then we started with his coat. We made it a colorful coat as in the story.

Next, we took the jumpsuit and added stripes to be his jail outfit. 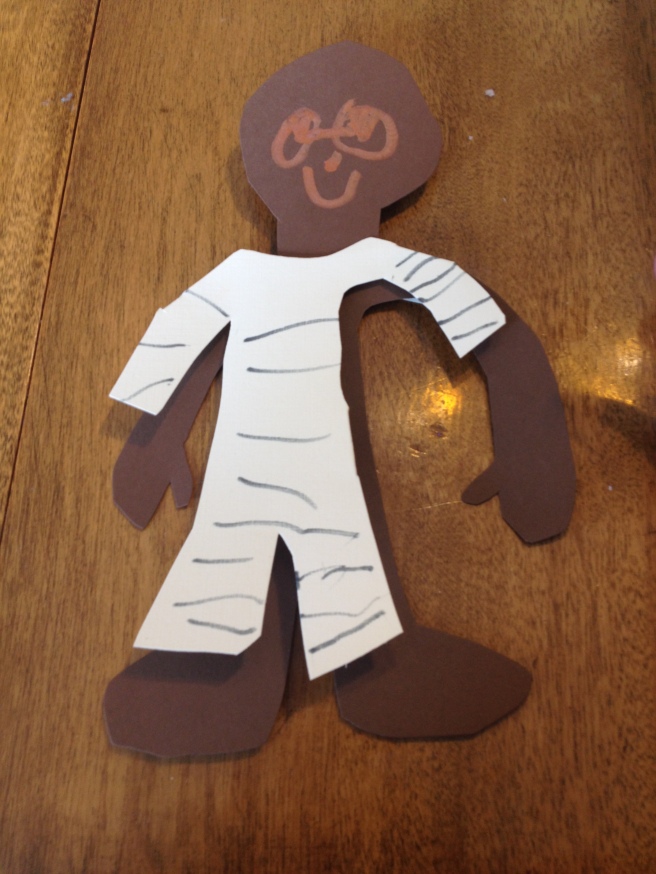 Lastly, we colored the skirt blue and added glitter to the necklace (to be his “in charge of Egypt” outfit)

Now they can retell the story–one outfit for each part of the story.

At this point Joseph had been sold by his brothers and was living and working in a new place called Egypt. It was far away from his home and his family. But Joseph started working for one of the king’s helpers named Potiphar. And he was a very good worker. Everyone liked him. Even, the worker’s wife. She wanted Joseph to love her and kiss her but he said, “No way! You are married to Potiphar, the king’s helper that I work for! I could never love you or kiss you. That would be wrong. You are supposed to only love HIM!”

That made her MAD so she LIED and told her husband that Joseph had tried to kiss her (when really SHE had tried to get him to kiss her). But Potiphar had Joseph put in jail anyway.

But Joseph started working in the jail and because he was such a good worker he was soon in charge of the jail! While he was in jail, God gave him a special talent. That’s something you’re really good at like singing or drawing or playing sports. (My kids understand talents because of the Tinkerbell movies–so if you’re familiar with that you can use the fairies’ talents to explain.)

Joseph’s talent was that he could understand dreams. A dream is like a story you think about when you’re asleep. But sometimes dreams can be silly or not make any sense. But Joseph could help people understand their dreams.

While he was in jail, two of the king’s helpers were also put in jail and they each had dreams. Joseph told the helpers what their dreams meant and they both came true! Joseph asked one of the men to remember him and how he had helped him when he got out of jail. He asked the man to tell the king good things about him so he could get out too, but the man forgot to say anything for TWO YEARS!

For two.more.years. Joseph sat in jail. Until one day, the king himself had two tricky dreams. All of his usual helpers didn’t know what they meant…but Joseph did.

Joseph replied, “Your dreams both mean that there will be 7 years of good food and then 7 years of famine (or no food, usually because there’s no rain.) You should find someone very responsible and put them in charge of saving up food, so when the bad years come, you’ll have leftovers and no one will be hungry.”

Joseph has had a pretty rough road….he hadn’t done anything wrong but bad thing just kept happening?! God had a good plan all along. And now Joseph was the 2nd biggest leader of all of Egypt!

But God is still not done with Joseph. Tomorrow we will see what else happens!