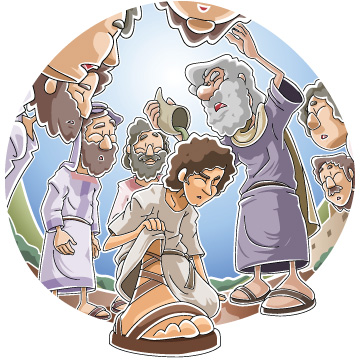 The Philistines attacked Israel (again) and King Saul and his boys were helping to fight. Three of Saul’s boys died and Saul was so sad, he fell on his sword so he could die too. Jonathan (David’s best friend) died that day too.

When David found out, he was very very sad. The man who told David Saul and Jonathan were dead said that HE killed Saul. That man lied. David answered, “Why did you kill the man God put in charge as king? Weren’t you scared to kill the man God chose?” Then David had that man killed too. The man lied…and then he died because of his lie.

Now, if you remember, there were 12 tribes (like big family groups) in Israel. Only one of the groups, Judah, wanted David to be their king. The rest wanted Saul’s son to be king. He has a long, confusing name: Ishbosheth. For a long time the people fought over who they thought should be king. A lot of people died. Which was kind of silly because God already said He wanted DAVID to be king…but the people didn’t listen. The leader of David’s army and the leader of Ishbosheth’s army fought and fought. The leader of Ishbosheth’s army, Abner, killed the brother of the leader of David’s army. So the leader of David’s army, Joab, killed the OTHER leader. See ALL these people making bad choices?? They ALL forgot that you’re not supposed to be mean to people just because they are mean to you. Lots of people kept dying because they were all being sneaky and lying and forgetting to obey God.

David made a covenant (like a promise) to the people of Israel to be a good king and all the people decided yes, he would be the new king over all the families in Israel. David will make his own bad choices too. When we read the Bible there aren’t just “good” people and “bad” people. EVERYONE except Jesus makes bad choices, disobeys God and sins. And LOTS of people in today’s story made bad choices too.

God still had good plans for His people though and He put David in charge because David had a heart like God’s. He wasn’t happy when people died. David didn’t want the people to fight. But now all of Israel was following him and we’ll learn more about King David next time. Thanks for joining us, love to you all.