Hi all! Today we’ll be learning a few more stories from the book of Numbers (these are found in chapters 17, 20, and 21.)

The Israelites were following God through the desert. God was in a cloud over the tabernacle (church tent) and Moses and his brother Aaron were in charge. But even though God had shown Himself to the people and done some pretty amazing things for them, they still complained and complained and they didn’t trust God to take care of them.

One day, the people disobeyed God and some of them died. Then the people got really mad and yelled at Moses and Aaron and said, “It’s YOUR fault those people died! We don’t think you should be the leaders anymore!” Aaron was the lead priest, who would give sacrifices and pray to God to forgive the people for their sins (bad choices). (It was important that the people listen to Aaron because God had chosen him to stand between the people and God.)

But God told them to bring 12 staffs, one from the leader of each tribe/family, into the tabernacle. The next morning, when Moses went to see the staffs, Aaron’s staff (big stick) had grown some flowers! All the people were amazed and reminded that God would choose who He wanted to lead the people. They put Aaron’s staff back in front to remind everyone not to doubt God’s choosing and to be thankful that He was a forgiving God.

Well, it didn’t take long before the people forgot about God’s goodness and again started complaining. They and traveled a long time and were tired and grumpy. The said “now there’s no water and we’re all going to die and HOW COULD YOU DO THIS TO US?!?!?!” God told Moses to go in front of the people and talk to a certain rock and it would give water to the people. Moses didn’t really obey God, he only kind of obeyed and he hit the rock instead of just talking to it. It did give water to all the people, but God wasn’t happy. Moses didn’t believe God that the rock would just give water by talking to it, he thought he would need to hit it. But is anything too hard for God? No! God can do anything! So God told Moses even he wouldn’t get to go into the promised land, only his kids and grandchildren. Again, the people had complained and not obeyed God and yet He still took care of them.

Again, after many years in the desert, the people were still following God around the desert and again, they started to complain. “There’s no food! There’s no water! HOW COULD YOU DO THIS TO US?!” God was very frustrated with the people for not trusting Him and He sent snakes to bite the people. It hurt a lot and some of the people died because they didn’t trust God. Moses asked God to forgive the people and God told Moses to make a big snake statue and the anyone who gets bitten by a snake can look at that and get better. If the people believed God and obeyed Him and looked at the snake statue, they got better. If they didn’t obey God, then they died.

Again and again as God led His people through the desert they complained and forgot to trust Him. Sometimes things can seem confusing or hard, but we can trust that God is always taking care of us. Sometimes when we make bad choices, there are bad consequences, but God still forgives us and still loves us. Isn’t that wonderful to know?!

For our craft today, we made a picture of the 3 parts of today’s story: 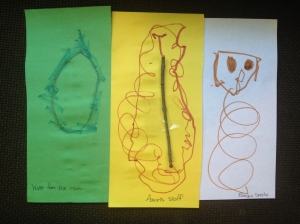 (water from the rock, aaron’s budding staff and the bronze snake) 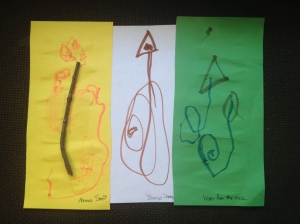 (aaron’s budding staff, the bronze snake, water from the rock)

Thanks for joining us today! Love to you all!