Today’s Bible story comes from the book of Judges, chapters 6-8. 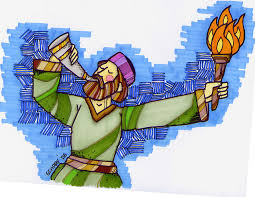 This is the story of a man named Gideon. Gideon was a regular guy, one of the Israelites (God’s chosen people). He was living in the promised land with the other Israelites. Now since they had moved in, they had a bad habit of following God and then forgetting and making bad choices. Then God would punish them, send them a new leader and they would follow Him again. Over and over and over. God is very very patient.

Once again, they were making bad choices and God let the Midianites rule over them for seven years. The people were scared and had to hide because the Midianites were so mean to them.

One day, an angel came and told the people to straighten up! Then he appeared to Gideon, and said, “The Lord is with you, mighty warrior!”

Gideon couldn’t believe the angel was talking to him. He wasn’t a mighty warrior?!

But the angel answered, “Go in the strength you have and save Israel out of Midian’s hand. Am I not sending you? I will be with you.”

The angel promised that GOD would defeat the Midianites.

Gideon asked for a sign that God had REALLY chosen him to lead the people against the Midianites. God told Gideon to cut down the idols (pretend gods) in his house and to make a sacrifice to God instead.

So during the night, Gideon cut down the pretend gods and the statues the people worshipped and instead made an altar (a place to worship) God. When the people got up, they were surprised and wanted to hurt Gideon. But Gideon’s dad said, “Isn’t it clear which God is more powerful? His altar is still here and the other statues and pretend gods have all fallen down. We need to follow the REAL God.”

Gideon still wasn’t quite sure God wanted HIM to lead the people against the Midianites, so he asked God for another sign. He said, “I will lay out a blanket of sheep’s hair. In the morning, let the sheep hair be wet and the ground be dry.”

And it was. But even that wasn’t enough and Gideon asked for one more sign. “I will lay the same sheep hair out tonight and this time let the sheep’s hair be dry and the ground be wet.” And the next morning, it was.

Gideon finally trusted! So he rounded up a big army and set out. But God said no. It was too many fighters. Everyone who was scared was allowed to go home. Then Gideon started off again, but God said no again. The army was still too big. He had Gideon send even more men home. (This way when the Israelites won, everyone would know it was God who had defeated the Midianites and not the army.)

So Gideon led his tiny army to the place where the GIANT Midianite army was camped. They split into three teams and surrounded the Midianites. They had breakable jars and trumpets. When Gideon told them to, everyone blew their trumpets and smashed the jars. The commotion scared the Midianites so much, that started killing each other?! Only a few got away and those guys the Israelites rounded up and they defeated every last one.

After Gideon and the men returned, the people wanted Gideon to be their king. But he said, “No. Let GOD be your king.”

Sometimes it can be hard to trust God, but we can remember that God always keeps His promises and that if He calls us to do something, He will always help us do it.

We didn’t do a craft today. Instead we watched the veggie tales Gideon the Tuba Warrior.

Thanks for joining us. Love to you all!