Welcome to the last story of the month of August. This month we’ve been covering stories from the Bible books of Leviticus-Ruth. Today’s story: Ruth!

Ruth gets her own book in the Bible…one of only two books named for women.

(Side note, the month of September we’ll be learning stories about the Old Testament Kings with stories from 1/2 Samuel, 1/2 Chronicles, 1/2 Kings, Ezra, Nehemiah and Esther.)

Next to the Israelites’ promised land, was a land called Moab. A woman from Israel, named Naomi had married a man from Moab. They had a son and he married a woman (from Moab) named Ruth. So Naomi’s husband had died and Ruth’s husband and his brother’s died…so it was just the two women left. Ruth and her mother in law.

Back then, women couldn’t just go get a job, so they knew they would be very very poor and have to beg for food and money to live. Naomi told Ruth to stay with her family so they could take care of her and she would go back to Israel.

But Ruth wouldn’t leave Naomi. “Where you go, i will go. Where you stay, i will stay. Your people will be my people and your God will be my God.”

So Ruth went with Naomi and they moved to Israel. They had no food or money, so Ruth went out each day and followed the workers in the field. (Naomi was too old to be out all day working, so Ruth took care of her.) She would take the leftovers and she and Naomi lived off the leftovers.

There was a very nice man, named Boaz who owned the field where Ruth picked her leftovers. He noticed her one day and invited her to lunch. He was very happy because he saw how much Ruth took care of Naomi. He told her she could always stay in his field and help herself to any of his leftovers. Before she left, he loaded her up with lots of food for her and Naomi. He told her God noticed what a caring and hardworking person she was and he knew God would bless, give good things, to her.

When Ruth went home, she told Naomi all about the nice man Boaz and how he had taken care of her.

Naomi knew Boaz would take good care of Ruth and she thought it would be a good idea if they got married. So, one day, she told Ruth to dress really pretty and put on some smell good perfume and to go lay down next to Boaz at bedtime.

When Boaz woke up in the middle of the night, he saw Ruth laying there and he was happy to see her and said he wanted to marry her.

The people in this story made good choices. Ruth stayed with Naomi and took good care of her. Even if things seem tough, we can do our best to take care of others. God saw how hard Ruth was working and how kind she saw and He provided for her. He gave her Boaz, who was kind and took care of both Ruth and Naomi. God wants us to love others the way HE loves us. He gave us His only son, to die for us and to save us. Like Jesus, we can serve others and help them.

God took good care of Ruth and He takes good care of us. We can also show His love to others, by helping take care of them.

For our craft today, we got some thistles from outside to be our wheat. I traced out forms to be Ruth, Naomi and Boaz and we taped it all together. 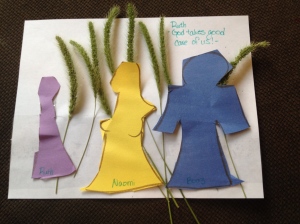 We also watched these videos:

Popsicle Stick Theater “What’s in the Bible? Volume 4: Battle for the Promised Land”

Thanks for joining us, we’ll be back in Sept with the Kings! Love to you all!