Hi all! We took a break last week to move! Now we’re back.

Today’s story comes from 1 Kings 3. I did not do a craft today with the kids, but i did use some of our toys to tell this story (works better with some visuals i think). 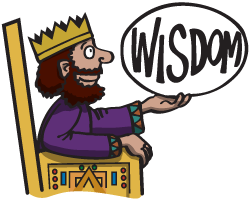 King David was getting old and almost ready to die. He told his son Solomon that he would be the next king. King David told Solomon to always obey God and do the right thing.

Some of Solomon’s brothers wanted to be king instead and even tried to fight him, but God made Solomon king.

Solomon tried to honor God and do the right thing. One night, while he was sleeping, God came to him in a dream and said, “If you could ask me for anything, what would you want?”

(If YOU could have ANYTHING what would YOU want?)

Do you know what Solomon said? He said he wanted wisdom. Wisdom is being able to understand things and make really good choices. A good king has to be wise to be a good leader for his people. He has to know how to help them and how to help them settle their fights when they are fussing.

God was so happy that Solomon had asked for wisdom and not something like money or a lot of toys. So God said, yes, Solomon WOULD be wise.

The people were so impressed with everything Solomon knew and how he could figure things out and help people.

One day, there were two mommies. They each had a new baby and they lived in the same house. When they went to bed, one of the babies died. That mommy went over to the other mommy and she switched the babies! So in the morning, the other mommy said, “oh no! my baby is dead! wait….this isn’t my baby? THAT one is my baby!”

But the first mommy said, “No! This is MY baby!”

They argued and argued and finally came to king Solomon who listened to their story. He had an idea. He called for a soldier with a sword to come. He told the soldier to cut the baby in half and give each mommy part of the baby. The real mommy could not, would not let them cut her baby into two pieces so she said, “NO! The other mommy can have him, just don’t hurt him!”

Solomon knew that THAT was the real mommy. A real mommy would never let anyone hurt her baby.

God was so pleased that Solomon wanted to do a good job and be a good king. The Bible tells us that when we ask God to help us make good choices, He will! He listens when we talk to Him and He wants us to help us do the right thing.

Thanks for joining us today! Love to you all!