Recap: After Solomon, Rehoboam was made king over Israel, but only the people from one tribe (family), the tribe of Judah stayed loyal to Rehoboam. The rest of Israel followed Jeroboam. But nobody really obeyed God. They worshipped pretend gods and statues called idols, especially one they called Baal. There were more kings after Rehoboam and Jeroboam, but pretty much all of them were terrible and disobeyed God.

A few kings later, one of the kings of Israel was named Ahab. Ahab was especially bad. He and Queen Jezebel did terrible things. They even killed people who worshipped the real God. God was VERY unhappy that the people were disobeying and worshipping other pretend gods. Because the people had been disobeyed God so much, he made it not rain for 3 YEARS. Do you know what happens to food if it doesn’t rain? The food can’t grow. Food needs dirt and sunshine and water to grow. Without water, the people would have no food. But that was the bad consequence for their choice to disobey God.

Elijah was a prophet. The king had been chasing Elijah to kill him (since he was someone who worshipped the real God.) Elijah came to Ahab the king and said, “Bring the people of Israel and meet me at mount carmel.” When the people came, Elijah said, “God says ‘STOP IT!’ If you believe God is real, follow Him…if these pretend gods are real, follow them!”

The people didn’t know what to say.

So Elijah said, “Let’s have a contest. We will each get a pile of wood and put a dead animal on it as a present to our gods. We won’t set it on fire though. I will pray to my God and you will pray to Baal and your other gods and we’ll see who answers and gives us fire.”

The people liked this idea. So they got two piles of wood and they sacrificed (killed) two bulls and they put them on the  wood. (This was how they used to make offerings or gifts to God to show Him they love Him or to ask Him to forgive them if they did something wrong…when Jesus died on the cross for us, He became the biggest offering ever and we don’t have to do that anymore because Jesus did that once and for all for us.)

Elijah told the people to call to their pretend gods. They said, “Baal! Baal! Baaaaaaaaaaaal! Answer us! Please?! Baaaaaaaaal!” They did this ALL. MORNING. Elijah said, “Maybe he’s just sleeping? Yell louder!”

Of course it didn’t work! They just had pretend gods, statues and made up things….statues can’t make fire. Pretend gods can’t really hear us.

Then it was Elijah’s turn.  He added 12 big rocks to his pile (one for each tribe/family in Israel) and then he told them to put water all over everything. Do you know what water does to fire? (My kids said it “melts it”). Water puts OUT fire. But to prove that God can do ANYTHING, even make fire on water, Elijah told them 3 times to put water on everything. Then he prayed to God. “Let everybody here know that YOU are God of Israel. Answer me so these people will KNOW that YOU are God and so they will come back and worship you.”

Do you know what happened next? FIRE! Big FIRE came and burned up EVERYTHING, even the rocks and all the water! NOTHING is too hard for God.

The people were surprised and they suddenly knew all the bad choices they had been making. They felt so scared and so sorry. Then, the clouds started to come, and finally after 3 years of no rain, it started to rain again. Because the people realized who the REAL God is and realized what terrible things they had done and were sorry, God let it rain again. He ended their bad consequence.

For our activity today, we went outside and gathered a pile of sticks. We pretended the people were calling to Baal and the idols…no fire. Then we poured “water” (actually isopropyl alcohol, but looks like water) onto the pile three times. Then we pretended to be Elijah praying to the real God (and with a lighter), lit the pile on fire. 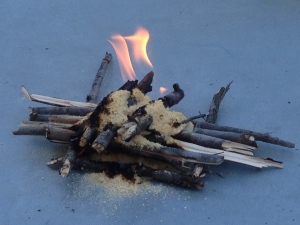 Thanks for joining us today, Love to you all!