Today’s story is a well-known story from Daniel 6.

So Daniel and the rest of God’s people were living in Babylon. They had to work very hard and had a lot of rules they had to follow. They had been taken from the good promised land God had given them because they had disobeyed Him and worshipped pretend gods.

King Nebuchadnezzar had died and another guy was king for a while and then he died and now a king named Darius was in charge.

Darius was really impressed with Daniel. Remember God helped Daniel be really good at making decisions and the King thought Daniel was really organized, smart and in control. He put Daniel and a couple other guys in charge of everyone else. But the other guys in charge were jealous (they were angry because the King liked Daniel more than them). They decided to watch Daniel and find a way to put him in jail.

But…after they watched and watched…they couldn’t find ANYTHING that Daniel was doing wrong. Daniel followed God and made good choices. So the guys came up with a plan.

They went to the king and said “Oh Great King! We have an idea! For the next 30 days everyone can only worship and pray to YOU! What do you think?”

So the king’s helpers wrote up the rule and he signed it. Everyone would worship and pray to only king Darius for the next 30 days or else they would be thrown into the pit of lions so the lions could eat them.

But Daniel loved God and he knew he couldn’t follow that rule. He prayed to God anyway…because Daniel knew it is more important to follow God than what other people say. The bad guys were watching and when they saw Daniel praying to God they ran back to the king.

“Hey! Hey! Remember that decree you made saying everyone has to worship only you or else they get thrown in the lions’ den? Well we found someone NOT obeying that rule!”

“Daniel!” they said. “He HAS to be thrown to the lions…it’s the rule!”

This made the king very sad because he really did like Daniel. But the rule was the rule. So they brought Daniel to the lions’ den. The king said to Daniel, “I hope your God can save you!”

They put Daniel in with the lions and closed up the pit.

The king went back to his castle and stayed up all night worried about Daniel. He couldn’t eat, he couldn’t sleep. In the morning, he rushed to the lions’ den and said, “Daniel? Are you there? Are you ok? Did your God save you!?”

A voice answered back, “Yes King Darius! I am ok! My God DID save me! He sent His angel to shut the lions’ mouths…they didn’t even scratch me!”

The king ordered his men to get Daniel out. The king was so mad he threw the bad guys in to the lions…and they did get eaten up! (Yikes!)

Daniel knew it is more important to follow God and do what He says than to do what other people tell us to do. He trusted God and God saved Daniel. God saved Daniel to show the king and all his men that HE is the almighty God, the ONE who is worthy of our worship and prayer. God shut the mouths of the lions, He can do ANYTHING.

There is a veggie tales of this story, and we also made lion crafts. We used paper plates and some cut outs for eyes and a mouth. Then we glued strips of yellow paper for the mane. Lastly, we took tape and closed the mouths of the lions. (The angel probably didn’t use tape…but this reminds us how their mouths were closed and they didn’t hurt Daniel.) 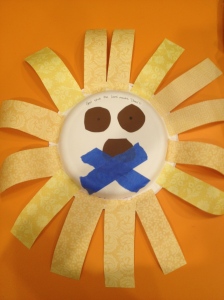