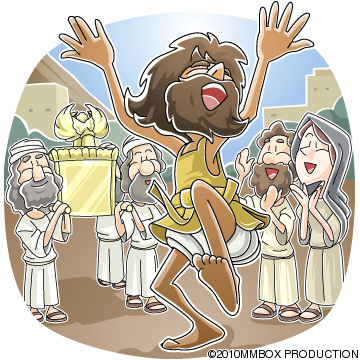 Do you remember the ark of the covenant…that special box of God’s power? It was still away from the church where it was supposed to be. The Philistines had taken it a long time ago and brought it back, but it was just at some guy’s house. (His name was Abinadab and he and his family had been taking good care of it, but it was supposed to be in the tabernacle.)

David, now that he was king, decided NOW was the time to bring it back where it belonged.  David and a LOT of helpers went to the man’s house and they very carefully carried the box just the way God wanted. They weren’t supposed to touch the box…only the poles it rested on. 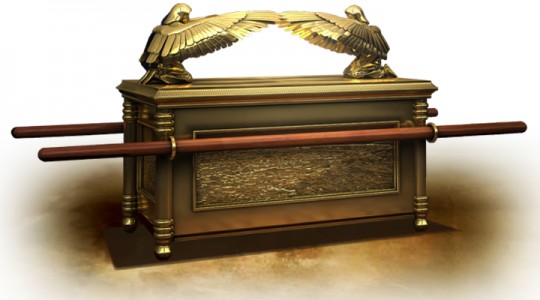 But along the way, they almost dropped it and one of the guys reached out to help the ark so it wouldn’t fall and he died right then and there! That may seem mean, since he was trying to help…but God had been very clear: the people were NOT to touch the ark. David was so so scared and so so sad that he said “No more. We’ll leave the ark right here.” They were right by another man’s house named Obed-edom. The ark stayed there at that man’s house for 3 months and then someone told King David “God has been very good to Obed-edom since he has been taking care of the ark of the covenant.” So David decided maybe they could try again.

This time, they did carry the ark back into the city to the tabernacle and everyone was SOOOOO happy! The special box that showed all the people God’s power was BACK! They played music and danced and sang songs, some people cried! Oh they were SO happy! (It’s like if you lost your FAVORITE stuffed animal, or if you got lost from your mom or dad and then you FOUND your favorite thing, or your mom or dad and all went back home together…how HAPPY that would be!)

Even King David was so happy HE was dancing. But his wife was not happy. “That’s not very dignified. YOU are the king. You shouldn’t be out there being silly like THOSE people. You are supposed to be important….in charge…you should not be dancing.”

But David said, “Ha! I was dancing for God! I remember all the good things God has done for me. He made me king, He chose ME! I don’t care HOW silly I look!  I want to praise God!”

Do you know there’s no wrong way to praise God? To thank Him for the things He has done for us? Sometimes at church we talk to God to say “thank you” or we sing songs or play music–you can draw a picture, you can write your own songs or dance as silly as you want. You can celebrate God however you want…and it doesn’t matter HOW silly you look! God LOVES a thankful heart–when we praise Him, it makes Him so happy.

What are you thankful for today? What do you want to celebrate about God? Now take some time with your family to praise God–with music, art, prayer, dancing…whichever way you want!