Hello again! Today we’ll be discussing the book of Obadiah. 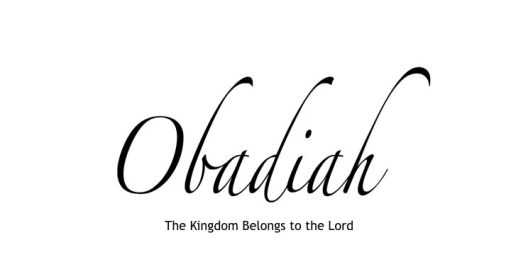 Obadiah was a prophet–that’s someone who talks to God and then tells the people what God wants them to know. Sometimes it’s good news, sometimes…it’s not.

The people of Israel (God’s people He chose to set apart to show as an example of His love) were made up of twelve tribes, or kind of like big families. Most of them had left and followed a different king and Israel split into two parts. Israel fought many wars and the people of most of the tribes of Israel were overtaken and had to move far away. The last family left was the family of Judah.

But even they eventually were captured by the Babylonians. The capital city of Jerusalem (where the temple was and where the king lived) were taken over too. The people who lived nearby were from a place called Edom. The people of Edom came and took all the people of Judah’s stuff–when the city got taken over they took their cows, their houses, their jewelry, their other animals, their toys and beds. The people of Judah ran away but some of the people from Edom would capture them and give them to the king of Babylon so he could put them in jail or even kill them.

This did NOT make God happy.

So Obadiah told the people God’s words. His message was short, but it has two parts. In the first part, he yells at the people of Edom for being mean to the people of Israel. He tells them they should NOT have taken the peoples’ things, they should not break and destroy their towns and that no matter how far they try to hide, God will find them and punish them for the things they did.

The second part of his message was to tell the people of Israel that even though things seemed terrible, that God still had a plan for them. God would bring them (at least some of them) back to Israel. God would restore their things and the land He promised to them. He would give that land back to them.

God is faithful. That means when He says something, He means it and He sticks by it. God promised that land to His people and He was going to make sure it stayed with them. We know if we make bad choices, that God sees those and wants us to make it right. And then sometimes we might face scary or hard times, but we can remember the promises of God: that He loves us, He has good plans for us, and He is in control.