So all the people who believed in Jesus were meeting together (like church). they lived together and shared everything they had. They all helped take care of each other so they could tell other people about God.

One man sold some of his land and brought all the money to the disciples to share with everyone.

Now a man named Ananias, and his wife Sapphira (can you say those names?) also sold a piece of property.  Ananias made a bad choice (and his wife’s knew about it). He kept some of the money for himself, but brought the rest and put it at the apostles’ feet and he pretended that was ALL the money.

But Peter said, “Ananias, why have you lied to the Holy Spirit and kept for yourself some of the money you received? It was YOUR money?! You could have kept as much as you wanted…but you pretended this was ALL the money. What made you think of doing such a thing? You have not lied just to us but to GOD.”

When Ananias heard this, do you know what happened? He fell down and died. And everybody watching was VERY afraid.

Later that day, his wife came in, not knowing Ananias was dead. Peter asked her, “Tell me, is this all the money you and Ananias got for the land?”

Peter said to her, “How could you ALSO lie to God?”

At that moment SHE fell down at his feet and died. Everybody who heard about these events was very afraid.

Do we always die right away when we lie? No. But God was showing His new followers that you can not try to trick Him. We can not lie to God. He always knows. And He takes us obeying Him seriously. He tells us to always tell the truth (say exactly what happened.) He made an example of Ananias and Sapphira to show all the people they must obey Him and that it’s impossible to lie to God.

If they had just said, “We made a lot of money and kept some…but here is the rest.” It would have been ok. But instead they tried to trick God.

This video is a “tim burton style” version of this story posted by Dan Stevers. (It is more appropriate for middle/older elementary than preschool as it’s a bit dark…but nice artistry and good storytelling.)

This video by LC LifeKids is a bit more for preschoolers.

For our craft today, we cut out a basic shape of a man and a woman with a bag of money in the middle. We drew Xs on their eyes and glued some sparkly money to the bag. 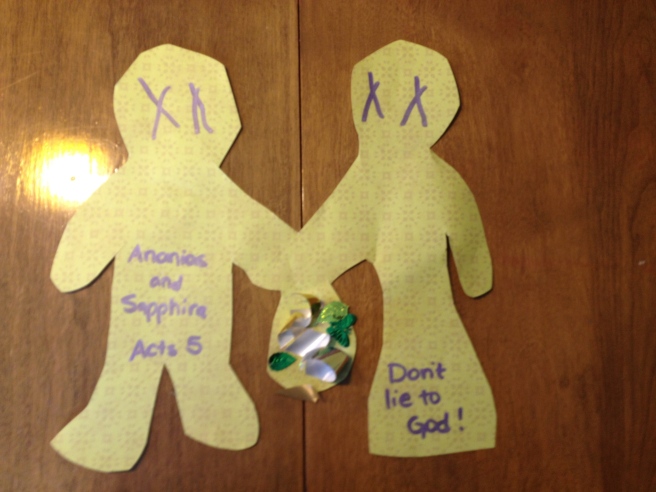 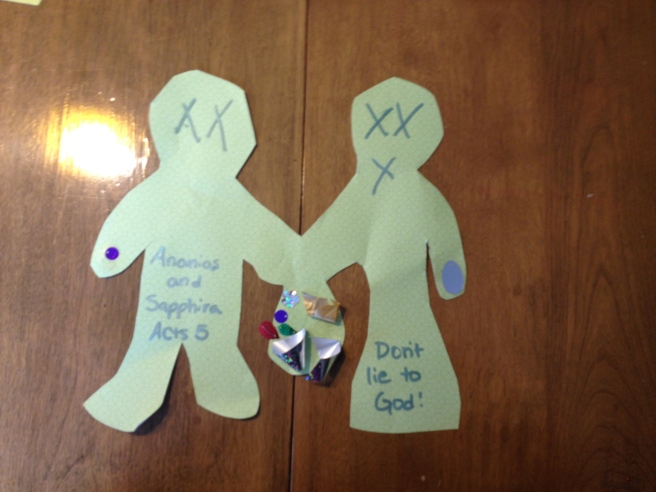 Thanks for joining us. Love to you all!

Hey all! Today’s Bible story is from Acts 3.

Remember, Jesus had died on the cross, lived again, and God’s Spirit came to live in the believers’ hearts.

One day Peter and John (two of Jesus’ disciples) were going to the temple (the church) at the time of prayer. There was a man who was crippled (he couldn’t walk) and he had been that way his whole life. Every day he would sit and beg for money from the people going into the temple courts. (Because he couldn’t walk, he couldn’t really work…so he just had to hope that people would be nice and share some money with him.) When he saw Peter and John about to enter the temple, he asked them for money. Peter and John looked at him. Then Peter said, “Look at us!” So the man gave them his attention, expecting to get some money from them.

Then Peter said, “I do not have money, but what I do have I give you. In the name of Jesus Christ, WALK.” He took the man by the hand, helped him up, and right away the man’s feet and ankles became strong. He jumped to his feet and began to walk. Then he went with them into the temple courts, walking and jumping, and praising God.  When all the people saw him walking and praising God, they knew him as the same man who used to sit begging and they were so surprised to see  what had happened to him.

When Peter saw this, he said to them: “Why does this surprise you? We didn’t make this man walk by our OWN power?! The God of Abraham, Isaac and Jacob, the God of our fathers, has sent His Son Jesus. You had him killed, but God raised him from the dead. We saw Him alive again. By faith in the name of Jesus, this man whom you see and know was made strong. It is Jesus’ name and the faith that comes through Him that has healed this man. Now its your turn to turn to God, so that your sins may be forgiven, and you too can receive God’s spirit.”

But there are always going to be people who don’t want to hear about Jesus. Isn’t that sad? Some of the people didn’t like that they were teaching about Jesus.

We know God can do anything! The people shouldn’t have been too surprised to hear Peter say they could do these things by Jesus’ power, but they were. God even surprises grown ups sometimes by the wonderful things He does! And the most wonderful He has done, is sending His Son Jesus to die for us and His Spirit to live in our hearts.

We drew pictures of the story today. (Time for my disclaimer that I’m a big fan of child-made art…we don’t do a lot of pre-made stuff…so it usually looks like 3-5 year old work…I believe it helps them retain the story better when THEY make it and have some creative freedom with it.)

Our text reads: Why are you surprised? God can do ANYTHING! Acts 3 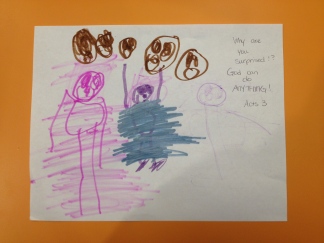 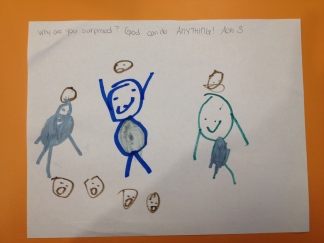 Hi all! This month we’ll be learning the stories after Jesus went back to heaven and we’ll begin some of the teachings of the New Testament. Today’s story is from Acts 2.

10 days after Jesus went back to heaven to be with God, the disciples and some other people who loved Jesus were all together in a house celebrating the feast of weeks (called Pentecost) when a big wind came and what looked like fire came and rested near each of them and they were able to each speak new languages.

They started telling all the people who had come for the celebration about Jesus and everyone could understand them. The people were so confused and said “how do these guys know how speak so many languages?! have they gone crazy?”

Then Peter stood up and said “no! these guys aren’t crazy! This is just what Jesus said would happen! Even from the beginning of the Bible, it was said that a Savior would come and that He would die for us. Jesus is that Savior! He came and loved us and died for us and He rose again, and now His Spirit has come to us. Be sure of this: God has made this Jesus, whom you crucified, both Lord and Messiah. Believe in Jesus, tell Him you are sorry for your bad choices and you TOO can have Jesus live in your hearts like He has come to live in ours.”

“We are able to say these things because we have God’s power in us. His Spirit helps us do this!” (Remember: God can do ANYTHING! And when His Spirit lives in you, you can do amazing things for God too! He shares all He has with you!)

Lots of people believed that day and became followers of Jesus. They all lived together and studied the Bible together. They shared what they had and did just what Jesus said…they told everyone about Him and made disciples of all the nations.

If we too choose to believe in Jesus and ask Him to forgive our bad choices, then He will forgive us and live in our hearts too.

For our craft today we made hearts with fire. We cut out hearts from red construction paper and two layers of fire from yellow and orange paper (you could also use tissue paper if you wanted). 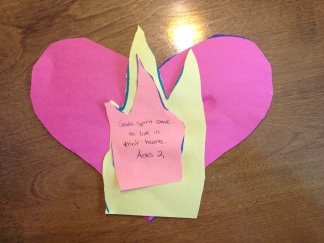 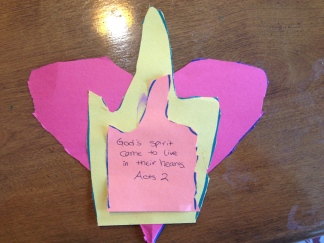 THIS is an exceptional video from the “Whats in the Bible” series (from the makers of Veggie Tales).

Thanks again for joining us. Love to you all!