Today’s story is from the book of Ruth. Last year’s story and lesson can be found HERE.

So just before Deborah was judge over Israel, the people next door to Israel, Moab, were being hard on Israel. Things were hard in Israel. There was no food (a famine) and a woman from Israel, named Naomi had married a man from Moab. She moved there and lived in Moab and they had a son. Their son grew up and he married a woman named Ruth.

Back then, women couldn’t just go get a job, so they knew they would be very very poor and have to beg for food and money to live. Naomi told Ruth to go back to her family so they could take care of her.

Ruth went with Naomi and they moved back to Israel. It was a hard life in Israel. They had no food or money, so Ruth went out each day and followed the workers in the field. (Naomi was too old to be out all day working, so Ruth took care of her.) She would take the leftovers and she and Naomi lived off the leftovers from the field.

There was a very nice man, named Boaz who owned the field where Ruth picked her leftovers. He noticed her one day and invited her to lunch. He told her he was very happy because he saw how much Ruth took care of Naomi. He told her she could always stay in his field and help herself to any of his leftovers. Before she left, he loaded her up with lots of food for her and Naomi. He told her God noticed what a caring and hardworking person she was and he knew God would give good things to her.

When Ruth went home, she told Naomi all about the nice man Boaz and how he had taken care of her.

Naomi knew Boaz would take good care of Ruth and she thought it would be a good idea if they got married. So, one day, she told Ruth to dress really pretty and put on some good smelling perfume and to go lay down next to Boaz at bedtime.

When Boaz woke up in the middle of the night, he saw Ruth laying there and he was happy to see her and said he wanted to marry her.

God used Ruth’s heart to be part of Jesus’ family. Ruth was a good hard worker who did the right thing. She took care of her mother-in-law, even when it would be hard. Boaz also did a good job taking care of his family. Do you know that one of the ways we can serve God is by loving our family? Sometimes people think you have to do something BIG or go far away to serve God or love other people. But one of the ways we can show God’s love best is by being an important part of our own family–loving the people He put us with every single day! How can YOU be a good worker in your family? How can you show your mom, dad, grandma, brother, or sister love?

For today we watched the Veggie Tales “Duke and the Great Pie War” (available to rent or buy on amazon).

Thanks for joining us again. Love to you all.

Hi all! Welcome to the official launch of this year’s advent calendar. (Each day will be a small devotion to share with your kids that includes a Bible story, a part of Jesus’ birth story, an attribute of God, and a craft.)

This month we will be studying about Jesus and His family. We will learn about some of the people that came before Jesus, but also, did you know that WE are part of Jesus’ family too?! The Bible says that if we love God and obey Him, then we are God’s children! (2 Corinthians 6:18) God is our Father!

And that makes Jesus our brother! Jesus said anyone who loves God and obeys Him is Jesus’ brother! (Matthew 12:48-50).

So this month, while we talk about God and baby Jesus and His family, we will make ornaments for a family Christmas tree.

Part of Jesus’ story: Jesus had an earthly family…parents and grandparents before Him

Attribute of God: God is Jesus’ Father and ours too if we love and obey Him

Craft: Today, I took 4 pieces of regular construction paper and drew 3 lines on each. Then the kids cut on the lines (to make strips of paper). We taped the strips together and assembled them to make a tree.

(If you don’t want to make whole tree to hang on your wall, you can just use your family’s regular Christmas tree as an example and put your ornament each day on that.)

Then we made the stump from brown construction paper and taped that on also.

2018 update: This year because our kids are bigger we added Isaiah 11 to the trunk of the tree. 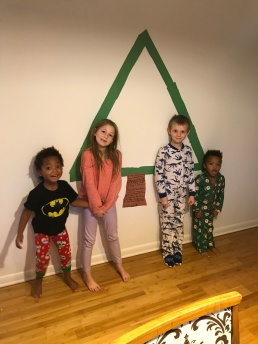