Hi all. Welcome to Exodus!

Today’s story is from Exodus 1 and 2.

Recap: So Jacob had 12 sons, one of them was Joseph (who we just learned about). Jacob/Israel and all of his other sons moved from Canaan to Egypt to be with Joseph. God had promised the family they would have a LOT of kids and then one day return to the land God promised them.

Jacob was old and he died, then Joseph and his brothers had kids and they got old and died. And they had kids, and they had kids…and the people of Jacob/Israel (known as the Israelites) lived in Egypt for 400 years.

These were the people God had chosen, the people of Jacob…and He blessed them. There were SO many of them and they were strong and healthy and good workers. BUT, the king (pharaoh) and people of Egypt began to be afraid of the Israelites because they were so many and so strong.

They started to make the Israelites work for them. They were mean to them and tried to keep them down. They made them slaves and it just got worse and worse for the Israelites, all because the king and people of Egypt were scared that the Israelites would take over.

Eventually, the king said “All the boy babies that the Israelites have, have to die. We don’t need any.more.Israelites!” The king and his men killed the sweet baby boys. Isn’t that sad?!

Well, one of Jacob’s sons named Levi, had a son who had a son who had a son, and he got married and he and his wife had a baby boy. The mommy couldn’t let them kill her baby boy, so she hid him in a basket. She covered him up and put him in the Nile River (a really big and important river through Egypt). Then she sent the baby’s big sister to watch and see what happened to him.

And do you know what happened? That baby floated down the river until he was spotted by the princess! The king’s daughter! She picked him up and she wanted to keep him. But she needed someone to help take care of him because he was still so little.

So the sister came out from where she was watching the baby and said “I know somebody who can take care of him!” And she went and got the baby’s mommy. The mommy was able to keep her boy and take care of him, until he was old enough, then he lived with the princess. The princess named him Moses (which means “i pulled him from the water”).

God had big plans for Moses…and we will learn more about that tomorrow.

For today’s craft we cut out pictures of a baby and a princess and glued them on our papers. Then we used toothpicks to make a reed-basket around the baby. We drew on water and Moses’ mommy and sister in the background. 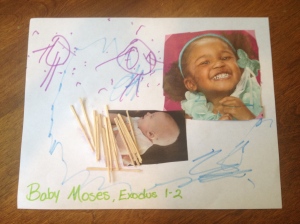 All for today…love to you all!