Jesus was now a grown up. He had been baptized by John and tempted in the desert and now He was just starting to teach the people all about God. One day, Jesus was teaching a crowd of people near a lake. He saw two empty boats and the fisherman cleaning up from their day. He got in one of the boats and asked the fisherman (named Simon Peter) to sail the boat out a bit so He could teach the people and then they could all see and hear Him (they were all crowding Him before.)

When He was done teaching, He told the fishermen to sail further out and put their nets into the water.

And guess what happened when he put his fishing net in the water? LOTS of fish! There were so many fish, Simon and his brother Andrew called their friends, James and John, out in their boat and they filled up both boats so full of fish the boats started to sink!

Simon fell down in front of Jesus and said, “I’m so sorry! You were right! I am a sinful man.”

But Jesus said, “Don’t be afraid…I’m not going to yell at you. But now, follow me and I will make you fishers of men!”

(Where they going to catch people in a net?? No…they were going to tell people about God and “catch their hearts.” They used to catch fish all day, and now when they followed Jesus, they would be getting people to follow God.)
These were Jesus’ first disciples. A disciple is someone who follows a leader and learns from them. They would also help Jesus on His journeys–telling people about God and God would even let them do some pretty amazing things which we’ll learn about later.

Did Jesus pick big important kings to be His helpers? He picked regular fisherman. He didn’t pick the fanciest, richest or strongest people. He picked regular people…just like you and me, to be His followers. (Of course God does WANT rich, strong, fancy people and kings to follow Him….but Jesus was showing that you don’t have to be anyone famous to love and obey Him.)

For our craft today we made fish from construction paper, a googly eye and some tissue paper. 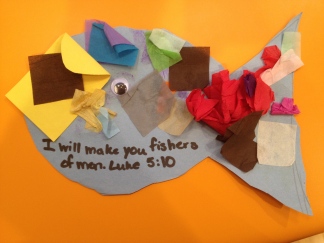