Hi all! This month we are learning about the miracles Jesus did! A miracle is something that shouldn’t be able to happen, but God makes it happen, because God can do ANYTHING!

Today’s story is from John 11.

Lazarus was Mary and Martha’s brother. (Remember the story where Martha was so busy cleaning and upset that Mary wouldn’t help, but Jesus said it was better to be still and be with Him, than be busy doing other things?)

So the sisters sent word to Jesus, “Lord, Lazarus is very sick.”

When he heard this, Jesus said, “This sickness will not end in death. No, he is sick for God’s glory and God’s Son will be glorified through it.” Jesus waited two days and then went to see them all.

Jesus told His disciples, “Our friend Lazarus has fallen asleep; but I am going there to wake him up.”

His disciples said, “Lord, if he’s just asleep, he will wake up?!” Jesus really knew that Lazarus had already died, but the disciples didn’t understand that yet. So then he told them plainly, “Lazarus is dead, and for your sake I am glad I was not there, because now when we go, you will believe in My power.”
When Jesus got there, He found out that Lazarus had already been buried for four days. A lot of people had come to Martha and Mary to help them feel better because they were so sad Lazarus had died.

“Lord,” Martha said to Jesus, “If you had been here, my brother would not have died….But I know that even now God will give you whatever you ask.”

Jesus said to her, “Your brother will live again. I AM the resurrection and the life. Whoever believes in me will live, even though they die, and whoever lives by believing in me will never die. Do you believe this?”

“Yes, Lord,” she replied, “I believe that you are the Messiah, the Son of God!” (Jesus said that if we believe in Him, even when our body dies, we will still live forever in heaven with Him!)

When Mary reached the place where Jesus was and saw him, she fell at his feet and said, “Lord, if you had been here, my brother would not have died!” It made Jesus very sad to see His friends so sad, and even though He knew Lazarus would live again, He still cried with them.

Then Jesus went to the tomb. (After someone’s body died, they used to wrap the body up like a mummy and then put them in a tomb…kind of like a cave and it usually had a big stone like a door).
“Take away the stone,” Jesus said.

“But, Lord,” said Martha, “his body has been in there 4 days…it probably STINKS by now?!”

Then Jesus prayed, “Father, I thank You that you have heard me. I knew that you always hear me, but I said this for the benefit of the people standing here, that they may believe that You sent me.”

Then Jesus called in a loud voice, “Lazarus, come out!” Lazarus got up and walked out. He was wrapped like a mummy and Jesus said to them, “Take off those strips of fabric and let him go.”

Many people believed in Jesus that day. God is the ONLY one with power over life and death. And Jesus (part of God, God’s son) has that power as well. The people now KNEW that Jesus was God’s son. And they knew He had the power to do ANYTHING, even bring someone back to life.

(Some of the people were NOT happy though. Like the pharisees and some of the other leaders. They started to come up with a plan to kill Jesus. But Jesus knew about this and went away for a while with His disciples.)

For our craft today, we cut out a man, and a cave. We glued the cave on first and drew a door. Then we glued on our man (Lazarus) and drew a face on him. Then we added strips of cut up fabric. Then we drew Jesus and our text reads: Jesus raised Lazarus from the dead. John 11 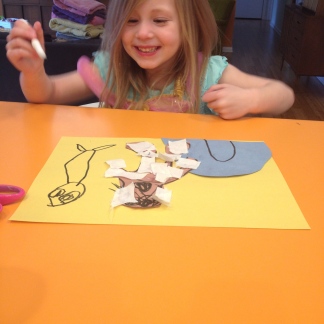 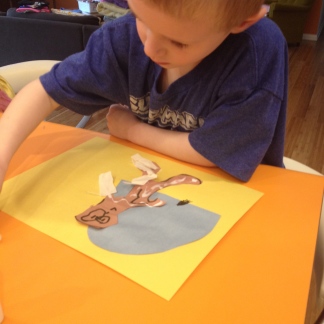