After Jesus rose alive from the tomb, He appeared to many people and He appeared to His disciples, but one of them, Thomas, was not with the others when Jesus came. They told Thomas that they had seen Jesus and that He was ALIVE!

Then Jesus said to Thomas, “Put your finger here; see my hands. Stop doubting and believe.”

We know Jesus now lives in Heaven with God, so we will probably not see Him while we live here, before we die. BUT, we still believe! Jesus said it’s a wonderful thing for someone who hasn’t even seen Him to believe in Him. We can trust His words. That is called Faith. In Hebrews 11:1 of the Bible it says, “Faith is being sure of what we hope for and certain of what we cannot see.” We can not see Jesus, but we KNOW Him and we love Him. We are sure of our hope of living in heaven with Him. Thomas didn’t believe until he saw Jesus…and do you know lots of people today still don’t believe in Jesus because they can’t see Him?

If trusting in God without seeing Him seems hard sometimes, you can always pray and talk to God and ask Him to help you have faith, and believe.

For our craft today, we traced our hands and used a pen to make a small hole in the hands, then used our scissors to make it a bit bigger. Our text reads:

“Blessed are those who haven’t seen Me and still believe.” John 20:29 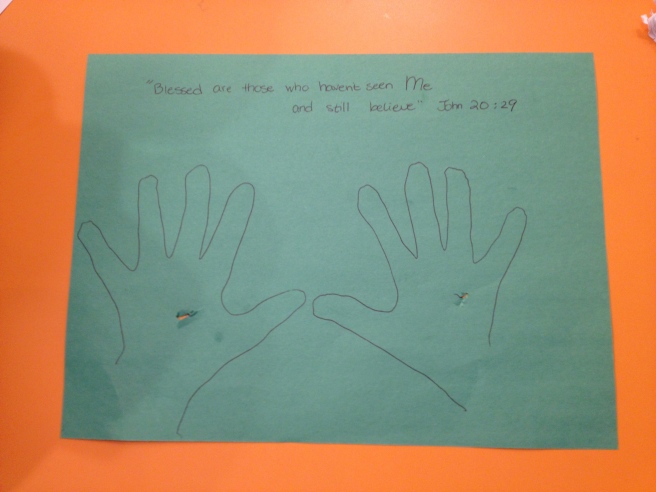