Hey all! Today we talked about the next part of Numbers (chapters 17,20,21). Last year’s lesson and craft can be found HERE.

The Israelites were following God through the desert on their way to the promised land…but no matter how many GREAT things God did…the people just COMPLAINED! It’s easy for us to complain instead of THANKING God for all the great things He has given us and done for us. Let’s take a minute to think about those things and thank God.

In the book of Numbers there are 3 stories about the people complaining and not trusting God. The first time they didn’t trust God’s choices. Aaron (Moses’ brother was the chief priest–the one who would give sacrifices and pray to God to forgive the people for their sins (bad choices). It was important that the people listen to Aaron because God had chosen him to stand between the people and God. But the people had disobeyed and as a consequence, some of them had died. Instead of telling God they were sorry, instead they said “It’s ALL YOUR fault, Aaron!” They wanted a NEW chief priest. They didn’t like the one God had chosen.

But God told them to bring 12 staffs (one from the leader of each tribe/family) into the tabernacle (the church). The next morning, when Moses went to see the staffs, Aaron’s staff (big stick) had grown some flowers! All the people were amazed and reminded that God would choose who He wanted to lead the people. They put Aaron’s staff back in front to remind everyone not to doubt God’s choosing and to be thankful that He is a forgiving God.

But, it didn’t take long before the people forgot about God’s goodness and again started complaining. They were complaining this time about the food and water. God told Moses to talk to a rock to give the people water. But even Moses didn’t always obey God. Instead of talking to the rock, he bonked it with his staff. It did give water to all the people, but God wasn’t happy. So God told Moses even he wouldn’t get to go into the promised land, only his kids and grandchildren. Even though the people had complained and not obeyed God, He still took care of them and gave them the water they needed. The people were reminded that He is a forgiving God.

Then later, many years later, the people were still following God around the desert and again, they started to complain. God was very frustrated with the people for not trusting Him and He sent snakes to bite the people. It hurt a lot and some of the people died. Moses asked God to forgive the people and God told Moses to make a big snake statue and the anyone who got bitten by a snake could look at that and get better. If the people believed God and obeyed Him and looked at the snake statue, they got better. If they didn’t obey God, then they died. Was the statue God? No. Did the statue have any powers? No. Only God has the power to make someone better. He just wanted the people to OBEY and look at the snake. He wanted them to TRUST HIM and obey. Even though the people complained and complained, God still gave them a way to get better. The people were reminded that He is a forgiving God.

Sometimes when we make bad choices, there are bad consequences, but God still forgives us and still loves us. We can always remember that He is a forgiving God. The people did not trust God…instead they complained. When we trust God, we will be thankful. Let’s try to be more thankful and trust God’s plans.

THIS video by Steven Bussell has all three of our mini stories in paper-bag puppet form (very cute and well done).

THIS is a great overview of the book of Numbers from the “What’s in the Bible” series posted by JellyTelly.

THIS is a very thorough overview of Numbers posted by The Bible Project.(Today’s lesson starts at about 3:15 into the video and goes until about 4:35).

Hello again! So last year we did an overview of Leviticus found HERE and then covered the first part of Numbers HERE.

Today, however we are just going to jump in and continue following the Israelites. This story is from Numbers 13/14. Last year’s lesson and craft on this can be found HERE.

So Moses and the Israelites had been freed from Egypt and had been given God’s rules on Mt Sinai and God was leading them to a special place He had for them. This was the land He had promised Abraham and Isaac and Jacob. God was bringing His people back to this promised land.

As they got closer they realized this place (called Canaan) had people living there. So Moses asked 12 guys (one leader from each tribe/family) to go check it out. They were like secret spies. For 40 days (a little more than a whole month) they watched the place. They wanted to see what kind of people lived there and if food would grow well there. They wanted to know what kind of weapons the people had, or if they had a big army.

Well…when they came back to report to all the Israelites they said “Good news! It has LOTS of great food! It’s beautiful!’

“But the bad news is….those are BIG scary people! And the city walls are BIG….it’s too scary…we shouldn’t go in.”

Two of the men, Caleb and Joshua tried to remind everyone that GOD was leading them. They didn’t have to be afraid with God on their side! God was on THEIR team! God had PROMISED them this land! But the people didn’t want to trust God’s promise. Instead…they trusted their fear. They said “It doesn’t matter what God promised us!? This is too scary! We shouldn’t try to take that land.”

And even though their trip from should have taken about two weeks….God kept the Israelites in the desert for 40 YEARS!!!

We NEVER have to be afraid to obey God. God might ask us to do some pretty scary things sometimes…but we can always know that God loves us, and protects us, and the best thing we can do is obey God, no matter what. Like Caleb and Joshua said “Do not disobey the Lord, and don’t be afraid…the Lord is with us! Don’t be afraid!” (Nu 14:9)

For our craft today we used paper plates to draw a face. Then we traced our arms in a “strong position”. We cut out the arms and taped them to the face. Then we bent them in half so they could cover the eyes of the face OR be bent out to be like strong, muscle arms.

Our text reads: We never have to be afraid to obey God! Numbers 13/14 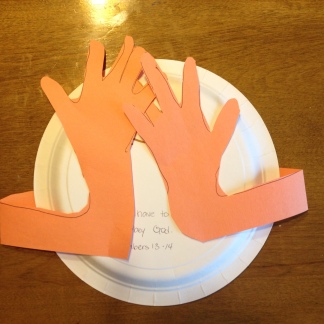 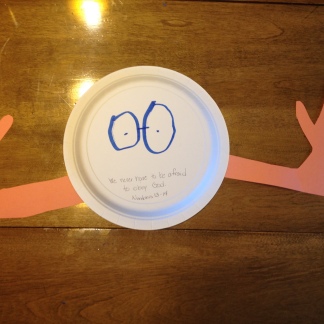 Hello again! Today we continue to follow Moses and the Israelites. This is from Exodus 16 and 17 in the Bible. Last year’s lesson and craft can be found HERE.

Moses and the Israelites had been freed from the Pharaoh and from living as slaves in Egypt. But now what?! God had led them through the Red Sea, saving them AGAIN from the Pharaoh and his army…and now? Sand. Lots and lots of sand. They walked around the desert for a LOOOOOONG time. (It wasn’t supposed to be THAT long…but they ended up disobeying God…but we’ll get to that part later.) For now…they were wandering around the desert.

What is a desert like? Do you know? (My kids said BOOOORIIIIING). There is little water or food. And the Israelites were hungry! Do you know how people act when they are hungry? That’s right…they get GRUMPY! They whined and complained and said, “WHY would God brings us out here?! At least we had FOOD in Egypt…I mean…it was terrible! But at least we had food!”

How do think God responded? Was He mad? Did He let them starve to death?

God was patient and He listened to the people and then He was gracious. (That means He was extra nice to them even though they didn’t deserve it.) God told Moses that He would send birds (called quails) that the people could eat every evening and that each morning He would provide a special bread called manna.

Every day (except for church day) they were supposed to go out of their tents and get as much manna as they needed for THAT day. If they got too much, it would get yucky. God wanted the people to trust Him every.day. If they could get as much as they wanted, they wouldn’t have to trust God to give them food every day. God wanted them to have just enough for each day (and twice as much the day before church day so they could rest on church day) so that every single day HE could give them what they needed.

And God DID give them manna every morning and quail every evening.

The people SHOULD have been thankful….but they got grumpy…again. They were tired of just eating the quail and manna. And one day, when they stopped walking, they were complaining about not having enough water. God AGAIN was gracious to His people and told Moses to go to a certain rock and to touch it with his staff (big stick). So Moses went before all the people and water came pouring out of the rock. Remember, nothing is too hard for God!

God loved His people and took good care of them…providing for them every day. God loves YOU too and He will take care of you every day too!

Thanks for joining us, love to you all!