Our story today is from Acts 9.

In our last Bible story we learned about Saul. He was one of the leaders and he did NOT like Jesus or His followers. He was even happy when Stephen was killed for telling people about Jesus.

One day, Saul was on his way to Damascus to capture more of Jesus’ followers and put them in jail. As he was waking, all of a sudden a very bright light shone down and said “Saul! Why are you hurting me?!”

The voice answered, “It is Jesus! The one you are being mean to! Now get up and go to the city.”

So Saul stood up, but he realized he couldn’t see anything! Scales, almost like a fishes scales, we’re covering his eyes! So some of the men traveling with him helped him up and took him to the city.

When they got there, God sent one of His helpers to Saul. He put his hands on Saul and the scales fell off his eyes and he was able to see! Immediately God filled him with His Holy Spirit and Saul (who also got a new name, Paul), began to learn from the disciples and then he too told everybody about Jesus!

All the people were amazed that this guy who once HATED Jesus was now telling everybody about Him!

God can change anyone’s heart and He has big plans for us if we will let Him use us. Isn’t it wonderful to know that even the people who make the worst choices can still be loved by God?

The next few stories will be about Peter and Paul’s various missions.

For our craft we traced a bowl to be Saul’s head and then we put some tissue paper scales over his eyes. 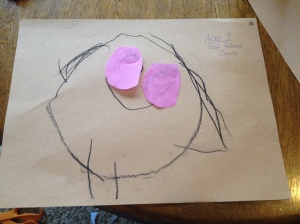 Thanks for reading, love to you all.