Hello again. Today we’ll be covering a story from Acts 5–about Ananias and Sapphira.

So during the early days just after Jesus had gone back to heaven and the people had received God’s Holy Spirit…all the people who followed Jesus, gathered together and lived together, worked together and shared everything. They shared their money, their houses, their food…everything. Some people even sold some of their things so they would have extra money to help take care of the disciples who were telling people about Jesus.

One man and woman, Ananias and Sapphira were some of these believers. They sold some of their land to help pay for the disciples’ food and clothes. But then, they made a bad choice. (Everybody makes bad choices sometimes…even people who love Jesus..even grownups.)

Ananias went to Peter and the other leaders and he took the money they had gotten from selling their house and land and he hid some of it (maybe behind his back or in his pocket). And he said “Here’s all the money from our land!”

But God told Peter that Ananias was lying. Peter said “Is that really ALL the money you got?”

Ananias said “yes…this is all of it.”

Peter said, “How could you lie to us? This land was all yours, the money was all yours…there’s no need to lie about how much money you got?! But since you did lie to us and to God!”

And then…Ananias fell down DEAD.

Then, a little bit later, Sapphira came in and Peter said “Is that ALL the money you got from selling your land?”

She said “yes, it is” (even though she knew they were hiding some.)

Peter said “How could you also lie to us and to God?!” And then right there, she died too.

This story is important because it shows us that God always wants us to be honest (to tell the truth) and that there is no tricking God. God knows everything.

Isn’t is wonderful to know that even when we make bad choices that God still loves us? He does! But He also wants us to come to Him and tell Him the truth. And He wants us to obey. Just because Jesus died on the cross for our sins (bad choices) doesn’t mean we can sin all the time or anytime we want! We still need to do our best to obey God and to always tell Him the truth. 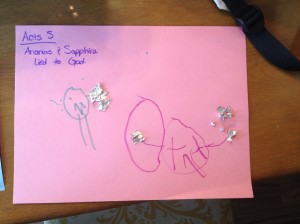 Next time we’ll cover the story of Stephen.

Love to you all!