Paul and Silas were going around telling everyone about Jesus, and helping people who were sick. Some of the people didn’t like that, so they put Paul and Silas in jail and hooked chains on their arms and legs and said the guard had to keep VERY good watch over them. If they escaped, the guard would be in BIG trouble.

That night, Paul and Silas were singing songs to God. Even when things seemed hard and yucky, they trusted God and told the other people in jail about Him. About midnight (the middle of the night), an earthquake came and shook the whole place. The floors and walls shook. The chains that were keeping Paul and Silas in place fell off and the gates busted open. BUT…they stayed. The guard was VERY worried and said “oh no! The gates are open! The prisoners are gone! I will be in SO much trouble!”

But Paul said “Don’t worry! We are all right here!” The guard immediately asked them what he must do to be saved.

Paul answered “Believe in the Lord Jesus, and you will be saved.”

The guard took Paul and Silas back to his house and everyone there believed in Jesus that night.

Paul and Silas obeyed and stayed in the jail even when they could have escaped. That showed that they trusted God and that they cared for the guard. God loves everybody and wants everybody to know about Him and His son, Jesus. Paul and Silas could have run away and saved themselves, but instead they stayed and saved the guard and his whole family.

For our craft, we drew Paul, Silas and the guard and made a chain link. We drew the jail and the earthquake. 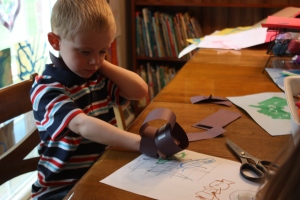 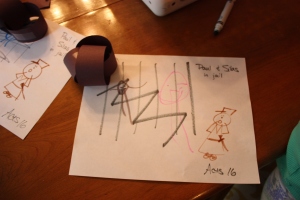 We’ll continue in Acts next time. Love to you all!

One thought on “Paul and Silas in Jail”